St Patrick’s Day was celebrated in style today. The college community was delighted to welcome Archbishop Philip Wilson to lead a special St Patrick’s Day liturgy. The Archbishop was also assisted by our local parish priest, Fr Pat Woods. As part of the liturgy a newly acquired print of St Patrick was blessed by the Archbishop. This print is now proudly on display in the College foyer. 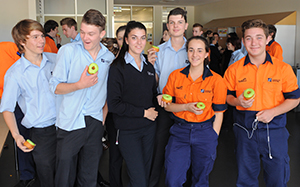 Following the liturgy, an assembly was held at which Mrs Helen O’Brien, Director of Catholic Education and Cr Duncan McMillan, Deputy Mayor of the City of Playford, spoke to students and staff. Both speakers commended the college on all it has achieved so far and looked forward to the college continuing to play such a positive role within the region in the future.

Special green iced donuts were distributed to students following the assembly to recognise that this was their feast day. The celebrations will continue with the traditional annual ‘Irish Games’ to be played next Thursday afternoon. The St Patrick’s Technical College community is proud of its connection with a remarkable man who continues to inspire young people in our world today.

“Our 700th apprenticeship commencement is a milestone of which we are enormously proud,” remarked St Patrick’s Technical College Principal, Mr Rob Thomas.

“Now in our tenth year of operations, this figure represents around two-thirds of all students who have attended commencing work whilst still enrolled at our specialist senior secondary technical and trade training school.”

“Employers such as AI Group Apprentice & Trainee Centre, working with BAE Systems, have been strong supporters of our award-winning program since 2007. Successful outcomes like today’s for Jared and Rhys are only possible through the close partnerships our school has been able to develop with local employers such as these.”

Learning on Monday that Rhys and Jared had both been successful in their application for, what was initially, one position available at BAE Systems, the College was faced with something of a quandary as to who would be recorded as #700!

“After receiving advice of our 699th apprentice in early March, we were aware that the next commencement was to be number 700,” commented Mr Kelly.

“We decided that the fairest and most transparent way to resolve this was by the toss of a coin.  We had no hesitation as to who should take on the responsibility and on Wednesday afternoon entrusted the task to StPatsTech Electronics teacher/trainer, and former BAE Systems employee, Mr Michael Gauci.”

View the video of the coin toss at our Facebook page >

Although Jared won the toss to be acknowledged as #700, Rhys did get to keep the $1 coin!

Mr Gauci worked at BAE Systems for 24 years completing his apprenticeship there as an Electronics Technician himself in 1989, going on to a career as an Electronics Engineer. After achieving his teaching qualification in 2014 and having undertaken practical teaching stints at St Patrick’s Technical College as part of his course, Michael joined the StPatsTech team following his graduation.

Michael’s knowledge and employment experience are typical of the teaching staff that have been assembled at St Patrick’s over the years.  The real-life experiences, advice and guidance this provides to students has undoubtedly assisted many hundreds of StPatsTech students, like Jared and Rhys, to gain employment in their chosen fields.

Rhys and Jared undertook a Certificate II in Electronics with Mr Gauci as the core component of their Year 11 program in 2015 and had commenced their Certificate II in Electrotechnology (Career Start) as their Year 12 focus this year with electrician and qualified teacher, Ms Linda Burton.  Both pre-vocational qualifications are delivered as part of the College’s unique cooperative agreement with TAFE SA.  This involves a VISA agreement for the Electronics qualification and delivery under the state’s only Work Ready sub-contract for Electrotechnology.

Employment outcomes such as today’s 700th, are the result of St Patrick’s Technical College’s unique combination of a trade-focused SACE curriculum, the pre-vocational training program developed in partnership with TAFE SA, our dedicated staff team and the significant input and support from local industry.

Not to mention outstanding young people such as Jared and Rhys! Congratulations boys.