StPatsTech Class of 2013 Food & Hospitality graduate, Sarah Voigt, is headed for the Big Apple!  A fourth year apprentice chef at Fino Seppeltsfield, Sarah is about to undertake a two week work experience of a lifetime at one of the world’s top restaurants working under the direction of one of the world’s best known chefs.

From the rural town of Eudunda, Sarah (pictured above left) attended St Patrick’s Technical College in 2012/13.  Her skill, passion and dedication to the industry was quickly recognised by the team at the Jacob’s Creek Visitor Centre, Rowland Flat, who signed her as an apprentice chef at the end of Year 11. Sarah completed Year 12 in a School-based Apprenticeship working at the acclaimed Jacob’s Restaurant where her talent was not only recognised by her employers at Hospitality Group Training, but also by the judging panel for the Group Training Australia (SA) Awards who named Sarah the School-based Apprentice of the Year for 2014.

Continuing to strive for excellence and broaden her experience Sarah moved to Fino at Seppeltsfield during the middle stages of her apprenticeship to work with well-known chefs David Swain (owner / executive chef) and Sam Smith (head chef).

Now approaching the end of her four year apprenticeship, next month Sarah is headed for the renowned restaurant Blue Hill at Stone Barns in New York to work under globally acclaimed head chef, Dan Barber.

Barber is author of the best-selling book on ethical and delicious eating, The Third Plate. He is known for blurring the line between the dining experience and the educational, bringing the principles of good farming directly to the table. He has received multiple awards including Best Chef: New York City (2006) and the USA’s Outstanding Chef (2009). In 2009 he was named one of Time magazine’s 100 most influential people in the world. He has been appointed by President Barack Obama to serve on the President’s Council on Physical Fitness, Sports and Nutrition. 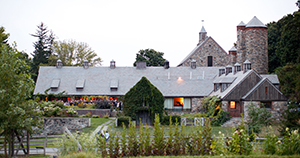 Sarah’s workplace during August, Barber’s Blue Hill at Stone Barns, is set on a 35 acre farm in Sleepy Hollow, New York, about one hour north of Manhattan. The restaurant, ranked #49 in the world, specialises in degustation dining where all produce used is grown on the farm. It is known for providing guests with a list of ingredients rather than a menu as part of the dining experience.

Sarah will undoubtedly enjoy the opportunity to immerse herself in the fast-pace, high-living atmosphere New York has to offer whilst gaining invaluable knowledge and experience from the world’s very best. As the holder of a US passport, Sarah’s goal is to secure work in America – hopefully at one of the Blue Hill restaurants at Stone Barns or Greenwich Village, NY.

Sarah is a wonderful role model and has returned to StPatsTech on a number of occasions as a guest speaker to highlight the possibilities and opportunities to current Food & Hospitality students. 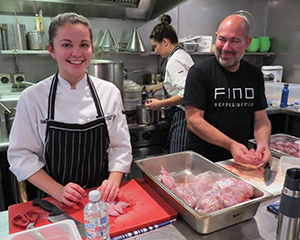 Following in Sarah’s footsteps and filling the gap left behind at Fino while she is in New York, David and his team at Seppeltsfield has engaged another StPatsTech Food & Hospitality student, 16 year-old Madison Ter Bogt, as their newest apprentice.

Maddie, currently in Year 11, is another young, aspiring chef with a bright future ahead of her and one to watch out for.

The great relationship StPatsTech has established with Fino, like that with many employers in the Barossa region who offer work experience and apprenticeship opportunities, has helped many students move on to great careers in their chosen trades. These opportunities are not limited to Food & Hospitality, but are also there in Hair & Beauty, Automotive, Construction, Electrotechnology, Engineering and Plumbing.

Not only are the College’s industry ties in the Barossa growing, there is an increasing number of students from the region attending St Patrick’s Technical College. The College is continually monitoring industry employment trends and endeavours to meet these needs with pathways for young people across northern Adelaide and surrounding regions.

First up for the Fighting Irish was Endeavour. After some hard-hitting and strong play from both sides, Endeavour ran away with the win. Stand out performances were from Max Joseph who was unstoppable as rover, Aidynn Webb who was unbeatable in ruck, Declan Moseley as our stay-at-home centreman and Nick McCue who had the difficult task all day of shutting down our opponent’s key forward.

Our second game was against hosts, Nazareth. This time it was clear we simply could not match their run and desire for the football. Nazareth had a number of players who were able to create great play for their side. For the Irish, our same four players were exceptional in the second match: Max Joseph, Aidynn Webb, Declan Moseley and Nick McCue.

Thanks to Mr Michael McFarlane for all his help as assistant coach, Steve Brookman and Darren Joseph for their support and Josh Denton and Lee Kessner as umpires.

That is all now for the football team in the knockout competition, but keep an eye out for another match potentially happening later on this year.

St Patrick’s Technical College has been named as one of 12 pilot sites for a re-elected coalition government’s Pathways in Technology Early College High School (P-TECH) style program. It is the first site to be named in South Australia. The announcement was made yesterday at the College by Minister for Education, Senator Simon Birmingham and Minister for Vocational Education & Skills, Senator Scott Ryan.

As part of the $4.6 million P-TECH pilot program, St Patrick’s Technical College will partner with the Defence Teaming Centre (DTC) to assist in providing pathways to employment for students in defence and defence-related industries.

Established by the Australian Government in 2007 as the Australian Technical College – Northern Adelaide, St Patrick’s Technical College has been a trailblazer in developing industry-specific curriculum and vocational education and training programs leading directly to employment.  To date, over 720 Year 11 and 12 students have commenced apprenticeships facilitated through the school.

The P-TECH program – adapted from the US model of the same name – focuses on direct relationships between school and employers, vocational education and training and the teaching of science, technology, engineering and mathematics (STEM) subjects.

St Patrick’s Technical College Principal, Mr Rob Thomas, says, “Participation in the P-TECH pilot will assist in bringing Defence Teaming Centre members such as Century Engineering, BAE Systems and ASC Pty Ltd – all of which already employ StPatsTech apprentices – into the classroom to collaborate on STEM projects and mentor students on their way to employment.” 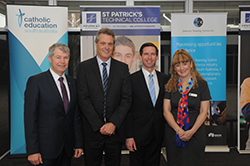 The Defence Teaming Centre (DTC) is pleased to support the P-TECH pilot. As the peak defence industry body, the DTC is playing a pivotal role in developing and maintaining a skilled workforce that will meet the demands of the upcoming defence projects in South Australia. STEM initiatives such as this are vital in encouraging and supporting young people to develop new technologies that will deliver the best possible capabilities into the future.

The DTC recognises the great work that St Patrick’s Technical College has done in order to be selected as one of the 12 P-TECH pilot schools.