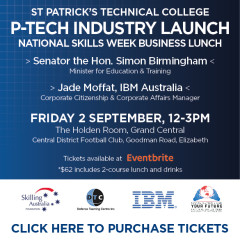 BUY TICKETS FOR THE LAUNCH >

The launch event will include a P-TECH Q&A panel presentation with representatives from the DTC, Skilling Australia Foundation and Australia’s first P-TECH Pilot Schools in Geelong and Ballarat. Q&A panelists include:

The P-TECH Industry Launch is your opportunity to learn more about this $4.3 million initiative, the benefits for local industry and how local employers can be directly involved from the very start of the program. The event is held in conjunction with St Patrick’s Technical College’s annual National Skills Week Business Lunch.

The first P-TECH school was established in the US by IBM in 2011 in collaboration with the New York City Department of Education, The City University of New York, and the New York City College of Technology. The first two Australian pilot sites in Ballarat and Geelong commenced in January 2016.