St Patrick’s Technical College students are more ready for the work force than their peers attending other pre-vocational programs, according to one industry group.

“I think the quality of students and what the school is teaching here at St Patrick’s in terms of what the workforce needs is fantastic,’’ Mr Prisk said.

“We do find the students here are very mature and they are work-ready. They tend to hit the ground running when they get an apprenticeship, which is extremely important for employers.”

Mr Prisk visited the College today to speak to the Year 11 Plumbing students about the industry and possible career pathways.

He told the plumbing industry was currently booming with plenty of job opportunities across the state.

“The industry is right now booming and going very, very well,’’ he told the students.

“I have to say, I have been taking a lot of your Year 12 students at the moment, which is great for them as they are starting a great career,’’ Mr Prisk said.

Mr Sreenivasan said Adelaide’s potential to become a manufacturing hub was huge with the area already boasting a talented workforce.

“Adelaide could become a hub for us because we see a lot of new talent and huge potential to grow supply chains in Australia and across the Asia Pacific,’’ he said.

Mr Sreenivasan said Adelaide already had the skilled workforce capable of serving today’s market but there was great capacity for more jobs in the future.

Northern Economic Plan Director Laki Kondylas said developing pathways for Northern Adelaide young people from school to the emerging industries was important to ensure the region benefited from the massive growth expected in the future.

“We think it’s pretty important to create pathways for people in defence industries. Defence industries in South Australia has a huge potential for growth and we are working to ensure we have appropriately skilled workforce available to take up those jobs,” Mr Kondylas said.

Dassault Systemes has announced Adelaide would support the delivery of a Virtual Shipyard Training Project. The company’s new Adelaide centre is expected to open by the second quarter of 2018.
Over the past few weeks, StPatsTech has also hosted other industry leaders at its $15-million purpose-built facility. 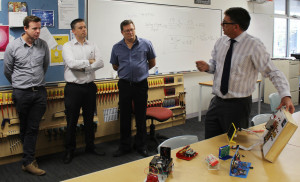 Representatives from the Defence Science and Technology Group (DST Group) toured the College with a particular focus on the new Information Technology course which is being run in partnership with TAFE SA and Saab Australia under the $5.1 million P-TECH Australia program.

DST Group has been a strong industry supporter of the College since it opened in 2007. One of the College’s first intake of students completed his apprenticeship with organisation.

St Patrick’s Technical College has welcomed news that Elizabeth will become a centre for crane manufacturing after it was announced Victorian-based Australian Crane and Machinery (ACM) would set up a base at the former Holden plant.

The $16-million announcement was made today and comes following an announcement late last year that Melbourne-based cyber security company VeroGuard Systems would invest $57.5 million in building a manufacturing facility in Edinburgh.

StPatsTech College Principal Danny Deptula said the 600 jobs expected from VeroGuard and 190 from the ACM manufacturing plant was great news for young people looking to enter a trade or technical career.

“While we hope this will provide employment for the workers affected by the closure of the Holden manufacturing plant at Elizabeth last year, we also recognise that the next generation of workers in the North will greatly benefit by having these multi-million companies operating in the area,” Mr Deptula said.

He said Automotive, Metals, Engineering and Electrotechnology students would be well positioned for apprenticeships with the companies. ACM will employ welders, fitters, auto electricians and machinists as well as automotive tradespeople.

“The announcement today is proof there is a strong future for apprentices in northern Adelaide and clear career outcomes for young people interested in trades,’’ Mr Deptula said.

ACM Managing Director Ben Potter said ACM chose the site in Elizabeth because of the presence of skilled labour, engineers and a stable workforce and political environment.

“The location is excellent for export market shipping and access to wind farms where our largest units are used for maintenance. Of course, the weather is also great, which is important for us working and testing our machines in the field,” he said.

ACM manufacturing centre will begin production early next year. The plant will cover up to 28,000 square metres and ACM will receive a $2.2 million grant from the Economic Investment Fund to establish the facility.

ACM is the largest privately-owned manufacturer of cranes and Elevated Work Platforms (EWPs) in the Oceania region and exports to the United States, Chile and Canada.

Today’s announcement adds to the success of Investment Attraction South Australia (IASA), which is bringing companies like Boeing and Technicolor to our state.

Premier Jay Weatherill said the announcement by ACM was a “vote of confidence” in South Australia’s ability to manufacture and export technically-advanced, large-scale equipment to the world.

“It will create a diverse range of jobs and apprenticeships in the metal trades. This is important in the context of creating and maintaining skill synergies across other industry sectors including defence, infrastructure, energy and mining,” Mr Weatherall said.