St Patrick’s Technical College is rocking out to the achievement of one of its students.

Year 11 Electrotechnology student Billy Burns is one third of punk rock outfit Burnout which was today named as a finalist in this year’s Triple J Unearthed High.

Billy along with band mates Kyle and Nik formed Burnout about six years ago and are inspired by ‘all great punk rock bands’. Their single, written by Billy, is called Get Out about what to do post-school. Since writing the song, Billy started as an Electrotechnology student at St Patrick’s Technical College with the hope to get a trade behind him while he pursues his dream of being a musician.

The band plays pubs and festivals around Adelaide. 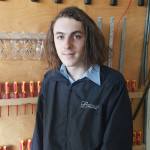 Billy is lead vocalist and guitarist and has been writing songs since he was 10 years old. He taught himself to play guitar at age nine using a second hand acoustic guitar and YouTube videos.

“We hope this gives the band national exposure to help them fulfil their musical dreams. The whole College community is right behind them,’’ Mr Deptula said.

In announcing the finalists, Triple J’s Music Director Nick Findlay said Burnout is ”every single punk band rolled into one”.

Winners will be announced on August 13 and will take home $5000 in prizes including professional support and advice, a recording session and management mentoring.

To listen to Burnout, Get Out follow this link to the Triple J page.