St Patrick’s Technical College students have been crowned the inaugural VEX Robotics champions for South Australia following a series of tournaments this year.

The VEX Robotics VRC Competition was held at Pedare Christian College with schools from around Adelaide entering teams.

The competition involves students building and coding VEX Robots to undertake autonomous and directed tasks to earn points. Teams are also judged on their knowledge, teamwork and workbook journals.

The win by the StPatsTech two teams – Silver Bugs Operatives and Last Place Wonders – who formed an alliance for the final bout, was even more significant for the College which introduced the Information Technology course in 2018.

Sliver Bug Operatives also took out the Judges’ Award for the tournament. 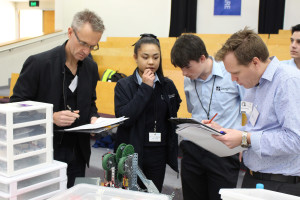 The teams during judging.

STEM teacher Brad Sheridan congratulated the students on their win.

“We bought the VEX Robots this year to really give the information technology students hands-on coding and engineering skills and we are extremely proud to see they have taken up the challenge with gusto,’’ Mr Sheridan said.

“These students are also fortunate to be part of the P-TECH Australia partnership with Saab Australia and DXC Technology. Through the P-TECH program, the students have been on work experience with both companies and received valuable classroom mentoring from software engineers and programmers within those businesses.

“Providing this support has really broadened the students’ knowledge, understanding and application of the technology they are learning.’’ 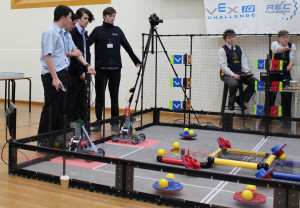 Mr Sheridan thanked Pedare Christian College for hosting this year’s competition and said he was impressed to see what other schools are doing with robotics.

“STEM skills are going to play a huge part in the lives of workers of the future, whether you are going down a university pathway or opting for a trade or technical career,’’ Mr Sheridan said.

Enrolments are now open to join the StPatsTech programming course in 2019.