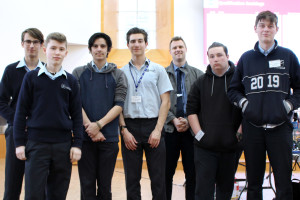 The VEX Robotics Teams have taken out first and second places in Tournament 1 of the VEX Robotics Competition held at Pedare Christian College, Golden Grove.

Competing in the Year 9-12 VEX VRC competition, the Year 11 & 12 Information Technology (IT) students are ahead of the game and have qualified for the National Tournament to be held in Adelaide in December.

Nine teams fought it out in the ring in the world’s largest and fastest-growing middle school and high school global robotics program. VEX Competitions bring STEM skills to life by tasking teams of students with designing and building a robot to play against other teams in a game-based engineering challenge.

Under the great mentorship of IT teacher Brad Sheridan, the wins by the College’s two teams – Paddy’s Cafe and Team 2 – was even more significant for the College proving how spectacular the IT students and staff are by winning two years in a row!