Luke has been signed as a metal fabrication apprentice by Stratco. He will complete this year in our unique school-based apprenticeship program, before transitioning to full-time employment upon his graduation in November. 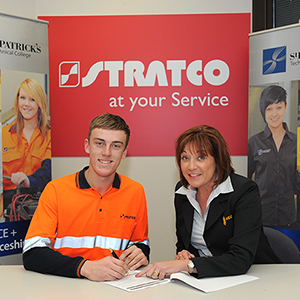 This marks an obvious and significant milestone in the relatively short history of St Patrick’s Technical College. When the school commenced operations in 2007, there was only one school-based apprentice employed in South Australia in any of the trades covered by our specialist school and its programs.

“To achieve 600 employment outcomes in the past 7½ years is a remarkable achievement for which our staff and directors (past and present), Catholic Education SA and those involved in the (now defunct) Australian Technical Colleges initiative are and should be justifiably proud,” commented St Patrick’s Business Development Manager, Patrick Kelly.

“It is a testament to the hard work and initiative shown by so many working towards the aims of providing young people with meaningful skills and a relevant school education, assisting them into the world of employment and meeting the workforce needs of employers in northern Adelaide.”

An interview with Victoria Filsell

Meet Victoria Filsell, a student of St Patrick’s Technical College in Edinburgh North. Victoria graduated in 2013 and is now studying a Bachelor of Science (Forensic and Analytical Science) at Flinders University. While at St Patrick’s, she was awarded a number of honours including:

Victoria’s passion for STEM has continued in her tertiary study, as discovered in her interview with Pam Gerrard from the Advanced Technology team.

Why did you choose to study at St Patrick’s Technical College?

I’ve always had an interest in Design and Technology. I was at Trinity College and one of the teachers suggested I should study something like child care instead of technology. But that wasn’t for me. So I enrolled into the Advanced Technology, Applied Engineering course at St Patrick’s.

The teachers at St Patrick’s were focused on helping us achieve, particularly with the research project in Year 12. And the Applied Engineering course allowed me to achieve my ATAR and gave me a direct entry into university.

What made you select Flinders University?

Flinders is the only university that offers a degree in forensics. I want to be a mechanical forensic specialist, which is the person that analyses cars that have been in a road accident.

What are your plans after university?

Like I said, I really want to be a mechanical forensic specialist, possibly for the SA Police or Forensic Science SA.

What differences have you noticed between studying at high school and studying at university? What do you like most about it?

There are more choices on assignments at university. But I think the biggest difference is that students genuinely want to be here. I really like how independent the learning is and that you need to be organised and motivated.

This interview is published with thanks to Pam Gerrard, Industry Broker with the Advanced Technology Project (DECD).

Catholic Education SA and the Association of Independent Schools of South Australia have collaborated in the development of the new resource to encourage schools and students to become involved in SBATs or ASbAs (Australian School-based Apprenticeships) and to give them guidance in doing so. 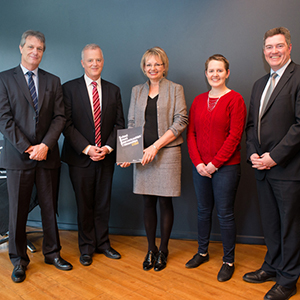 The work was part funded by the Australian Government. Minister Ley officially launched the publication at today’s event which was attended by 80 or so Vocational Education and Training coordinators and special guests including the Director of Catholic Education SA, Dr Paul Sharkey.

Sarah spoke of her pathway to employment with Hospitality Group Training / Jacob’s Creek Visitor Centre through a school-based apprenticeship and studies at St Patrick’s.

Sarah has recently won a number of awards including a 2013 Australian Vocational Student Prize and the Group Training Australia SA School-based Apprentice of the Year award.

Photographs on this post are courtesy of Catholic Education SA.

An interview with Jarad Hearnden

Meet Jarad Hearnden, a past student of St Patrick’s Technical College. Jarad graduated in 2013 and is now in his first year of an electrical engineering apprenticeship at ASC. He is currently working on the build of two Air Warfare Destroyers, one of which will be put in the water later this year. Whilst at St Patrick’s he was appointed Trade Leader by his peers, which involved raising issues brought to him by class mates and representing his trade group at assemblies and giving reports.

Why did you choose to study at St Patrick’s Technical College?

I was at Golden Grove High School and was keen to learn more about engineering. I transferred to St Patrick’s because they offered a course in Applied Engineering, which, at the time, wasn’t yet available at Golden Grove.

What was your favourite thing about studying at St Patrick’s?

I really liked the practical work we got to do at St Pat’s. For two days a week, we were out of the classroom and doing more hands-on work.  I also like that we got to do extra work experience there.

Why did you choose the Applied Engineering course?

I wanted to keep my options open for after high school. At the time, I wasn’t sure if I wanted to study engineering at university or do an apprenticeship in electrical engineering. My time at St Patrick’s helped me figure out that I prefer hands-on work so I decided on the apprenticeship.

What drew you to ASC?

When I was in Year 11, staff from ASC came to our school to talk about the industry and what they do.  I thought it was really interesting but I wanted to finish Year 12 first. I put in an application on the first day they opened.

What differences have you noticed between studying at high school and working at ASC?

Working on an Air Warfare Destroyer is exciting. Everything is bigger and better. When I was at school, I didn’t recognise how important workplace safety is. But being here has really taught me how important it is.

At ASC, you get to work with different people on different areas of the ship. And you get a rostered day off too.