A St Patrick’s Technical College student has swapped her school books for her passport this week as she jets off to the United States to compete in an elite cheerleading competition.

Siobhan Butson, 16, from Angle Vale is part of Gawler’s MTM Allstars Magic Gold team that was selected to compete at Duel in the Desert in Palm Springs, California. Duel in the Desert is one of America’s most famous cheerleading competitions and Siobhan will see routines from some of the world’s best teams. 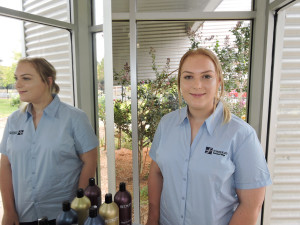 Along with her mum Jodie and 16 teammates, Siobhan will also get the chance to see Los Angeles and Disneyland while in the US.

“I’m really excited to be able to compete against the Americans because they were the originals and they are really, really good,’’ Siobhan said.

“I’m very happy to have this opportunity.’’

Magic Gold will compete in Level One of the five-level competition and have been training hard to hone their routine. The team were rated South Australia’s best team last year, which earned them a place at the national competition Pinnacle in November.

Siobhan was part of the 2018 Year 11 intake at StPatsTech and is studying Hair and Beauty as well as her SACE. StPatsTech wishes her all the best for the competition.

Combining trade training with an elite sports career is one way St Patrick’s Technical College student Jaden Rollison is guaranteeing a secure future for himself.

Jaden is one of South Australia’s most talented young track cyclists and will soon represent the state in the Under 17s Australian Junior Track National Championships in Melbourne.

The former BMX champion is the current State Sprint Champion holding the gold medal in both the 200m and 500m sprint. Training seven days a week, Jaden one day hopes to be selected to represent Australia at the Olympic Games.

Jaden, who cycles for Central Districts, joined the Year 11 intake to StPatsTech in a bid to secure an apprenticeship as a plumber. Inspired by his pop, who was a plumber for 50 years, Jaden hopes he can combine his trade training and cycling schedule.

He said he appreciated the value of having a trade behind him, especially once his cycling career winds down.

College Principal Danny Deptula congratulated Jaden on his impressive achievements and wished him all the best for the national titles.

“Jaden has obviously seriously considered his future and can see the value in developing skills off the cycling track which can support his dreams of becoming an Olympian,’’ Mr Deptula said.

“StPatsTech is a great choice for young sportsmen as they can continue to follow their sports passion while securing an apprenticeship or traineeship, which can serve them for the rest of their lives.’’

The 2018 Cycling Australia Junior Track National Championships will be held at the Disc Velodrome from February 19 to 25.

Apprenticeships for Northern Adelaide’s young people play an important part in the economic and social health of the region, according to Chairman of the Northern Economic Plan Steve Ludlam.

‘We like to see what different organisations are doing and how we can work together to provide support for apprenticeships,’ Mr Ludlam said.

Mr Ludlam said the Northern Economic Plan had done a lot of work around supporting the workers during the recent closure of the Holden factor at Elizabeth but also wanted to ensure pathways to employment are open and accessible for the region’s youth. In particular, Mr Ludlam said growing the area’s Defence industries would see more jobs for youth and benefit the region in the long term.

Mr Deptula said StPatsTech had a tradition of fostering strong links with industry.

‘We have had more than 820 young people signed up to an apprenticeship because our students are learning the skills that industry need and want,’ Mr Deptula said.

‘Being responsive to industry demands means that local businesses can source local workers and this has a wonderful flow-on effect across our entire community as well as changing the life of that young person placed into an apprenticeship or traineeship.’

With the College introducing the P-TECH Australia program in 2017 with a focus on Defence industries, Mr Deptula said the school was well aligned to help provide the modern workforce employers will need as the Defence space expands in Adelaide.

St Patrick’s Technical College students have begun 2018 on the right foot, with a handful of students working over the school holidays to secure themselves a School-based Apprenticeship or Traineeship (SbAT) by the time classes started this week.

Three students have signed on for a SbAT during the school holidays and another student will soon begin his trade career.

College Principal Danny Deptula said the students’ commitment to gaining an apprenticeship or traineeship set the tone for the 2018 school year.

“Here at StPatsTech, we strive to help our students develop their own unique gifts and talents and prepare them for the world of work,’’ Mr Deptula said.

“If our students show they have the right attitude and are committed to their chosen trade, they will be afforded amazing opportunities that can set them onto a lifetime of success.

“We are not a traditional school where ATAR scores are given high priority. We focus on employability skills which means developing the person, fostering the right attitude, learning resilience and building confidence.”

One student who has taken the initiative is 17-year-old Cristian Neve. Cristian, from Angle Vale, has begun a Certificate III in Concreting through MEGT with Burton-based Xtreme Concrete Construction 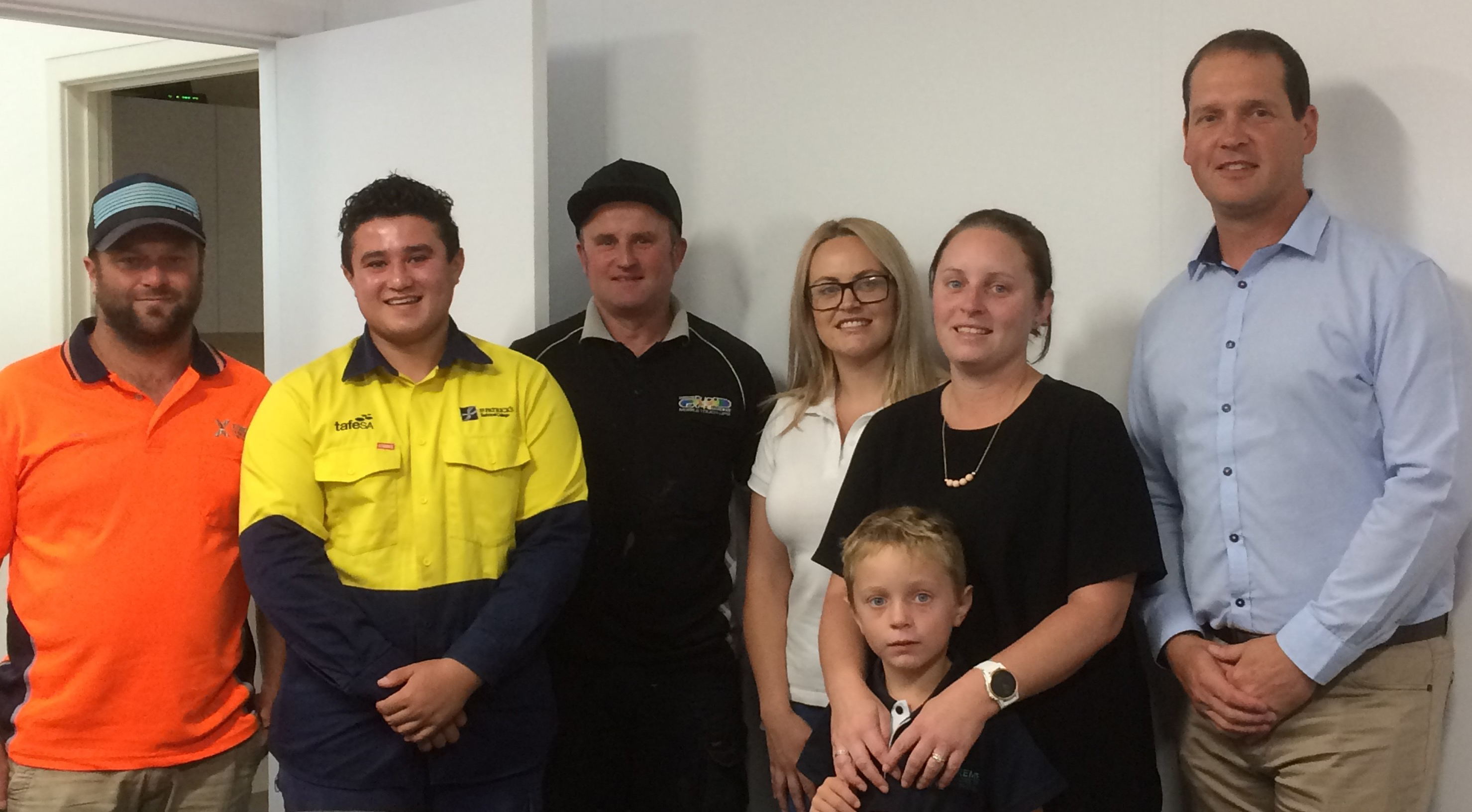 . He will spend 40 weeks this year with his employer and six weeks at school completing his SACE.

This will mean Cristian will graduate Year 12 in November 2018 with the first year of his traineeship completed and his Year 12 certificate.

“It’s very important to me to get my SACE because in the future you don’t know what will happen and it’s a good thing to have under your belt,’’ Cristian said.

Cristian did work experience with Xtreme Concrete Construction last year as part of the extensive StPatsTech Year 11 work experience program before moving into a part-time labouring role with the company. He signed his traineeship on January 11.

Mr Deptula congratulated Cristian on his traineeship and said Cristian and the College’s other SbATs were on the pathway to success in life.

“For example a student in an apprenticeship at 17 years old can expect to earn about $250,000 in wages by the age of 24. With no HECS debt like their 24-year-old university graduate peers, the tradesperson would be able to afford to buy their first home. By the age of 35, the tradesperson could have paid off their first mortgage and be financially secure into the future,” Mr Deptula said.

Establishing an entirely new school usually takes up to four years, but when St Patrick’s Technical College began it took a small team under two years to open the doors for students.

One of the original instigators of St Patrick’s Technical College, then known as the Australian Technical College (ATC) – Northern Adelaide, was Jim Montgomery, 72, who recently retired as the school’s Industry Relations Manager, a role he has inhabited for the entire life of the College. Mr Montgomery is responsible for ensuring the College has a strong relationship with local industry and is meeting the skills needs of those industries.

He leaves the role in the capable hands of Toni Hartley who has worked closely with the College through the Skilling Australia Foundation’s P-TECH program.

Affiliated with the now defunct Northern Adelaide Development Board (NADB), Mr Montgomery was asked to help build the case for a technical college in Adelaide’s north by NADB manager Max Davids. Mr Davids, who was the driving force behind the establishment of StPatsTech, would go on to be a member of the College’s inaugural board.

In 2005, partnering with Catholic Education South Australia (CESA), Mr Montgomery helped write the submission to the Federal Government for the College. He was responsible for writing the industry side of the proposal by addressing industry needs and wants and building relationships with local employers and businesses.

“When it established the Australian Technical Colleges, the Federal Government laid down some guidelines. One of those was the requirement for the schools to be industry-driven. I had already done many years in industry relations with the NADB, so that is why Max asked me to help with the submission for Northern Adelaide,’’ Mr Montgomery said.

The submission by the consortium led by Mr Davids and CESA was successfully selected to establish a northern Adelaide ATC, one of three set up in South Australia. But this is when the real work began and Mr Montgomery was asked to stay on the team to help develop a business plan.

“Max was really the driving force behind the establishment of the college during this time and he was determined to see it through,’’ Mr Montgomery said.

“At this time I was working as a consultant and really focussed on developing the industry links right up until the College opened.’’

By September 2006, the newly-formed board were able to appoint staff to the College and the first END_OF_DOCUMENT_TOKEN_TO_BE_REPLACED