A recent visit to PMB Defence (PMB) in Osborne electrified the curiosities of our Year 11 Electrotechnology students.

The visit was integral to their Battery Management System project, part of the Systems and Control Products Course with teacher Mr Michael Gauci, and mentored by PMB engineer Peter Branson.

A leading supplier of high-quality energy and specialised engineering solutions for submarine platforms, the company’s state-of-the art production, research and development and engineering facilities, situated at the heart of the Techport ship-building facility, provided students with invaluable insight into the Australian submarine and wider defence domains. Students gained a deeper understanding of engineering capabilities in mechanical and electrical/electronic design, test and evaluation and observed aspects of the battery making process. 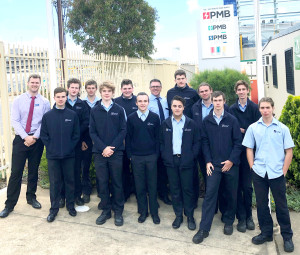 “To have Peter Branson, an engineer of the Collins-class Submarine batteries mentoring our students and sharing his knowledge is invaluable.’’

As part of the program, students continue to experience real hands-on learning and guidance from industry professionals who make a difference and an impression on our students.

Site visits expand on students’ understanding of their chosen career pathway. The PMB visit provided our Electrotechnology students with an authentic experience and insight into the breadth of the electrical or electronics fields.

Thank you to Peter Branson, Allison Lang and all PMB staff who welcomed and inspired our students on the day.

As well as presenting graduating students with their Certificates of Completion, individual awards were presented as part of the College’s annual Awards Program.

Thank you to our 2019 Awards Sponsors: 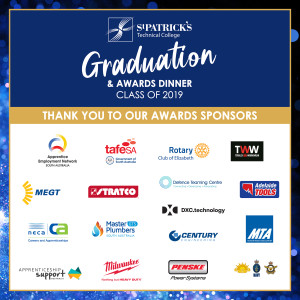 THE LONG TAN AWARD was presented by the Australian Government in conjunction with the Australian Defence Force. Since 2006, a student in every High School in Australia has been presented with this award. The award is to recognise and encourage senior students to actively participate in the life of their schools and wider communities.

Jackson Billingsley is the recipient of this year’s award for leadership and teamwork and was presented by Board Chairperson Mrs Tricia Hicks.

THE COLLEGE SPIRIT AWARD recognises a student of the College who has been generous in serving the needs of others and who has always acted as a role model for other students.

Jackson Billingsley is the recipient of this year’s award and was presented by Elizabeth Adamson from Rotary Club of Elizabeth.

Jackson powerfully exemplifies all the qualities associated with this award. He is a mature, kind and respectful person, with a happy go lucky personality. During his two years at St Patrick’s Technical College, Jackson has actively involved himself in the life of the College. Jackson was recently recognised as a student who lives out values of College as a recipient of the 2019 Mary Mackillop Award. He has a genuine concern for others shown through his participation in the 2018 Cambodia Pilgrimage. This year he issued a fundraising challenge to raise money for Cancer research and shaved off his much-loved long hair to raise awareness and funds for a worthy cause.

This year’s Principal’s Award for the Student of the Year is Emily Rees and was presented by Wendy Burford from Totally Work Wear Salisbury.

Engaging future employees starts before they apply for a job, and thanks to the Baking Association of Australia (BAA), our Year 11 Food & Hospitality students had a taste of what it’s like working within this industry at a recent Showcase Day.

St Patrick’s Technical College was privileged to be selected as one of two schools to hold this unique event with the aim of providing students with insight into the industry and to bring awareness of the abundance of apprenticeship opportunities currently available.

One of the key elements to educating potential new students on industry career potential is the opportunity for them to put their learning into practice and that’s exactly what our students experienced with professionals at the top of their game.

Conor McNaught, 2017 Baking Apprentice of the Year in the prestigious LA Judge Award and one of BAA’s Queensland mentors, impressed students and staff with his industry knowledge and passion for the industry. While experiencing expert instruction and learning new technical skills, students participated in hands-on learning to create some mouth-watering pastries.

To sweeten things up, Amy Sajinovic, Head Chocolatier at the Barossa Valley Chocolate Company, showcased her impeccable talents by demonstrating the fine art of chocolate making and the science behind the art. Amy tantalised the tastebuds of our students who couldn’t wait to try their hand at the craft and the just delights.

With a passion for innovation and creativity, the Melbournian was hand-picked by the Barossa company this year to head their team and has been instrumental in the use of state-of-the-art specialist machinery not seen anywhere else in the Australia. This area of the industry sweetened the interests of our students who look forward to visiting Amy at her workplace to learn so much more.

Baker Bear’s Bakery was instrumental in the day by providing students with an understanding of how to gain the skills and knowledge needed for a successful career in the baking industry. Baker Aidan Cox taught students the basic techniques in dough making and theory and a tactile experience of cutting, weighing and making a three-strand plait.

And to top it off, the art of cupcake decorating was instructed by Hannah McDonald, 2018 Champion Young Baker at the Australian Bake Skills Championships. Learning the fine techniques in handling, Hannah made it look so easy piping and decorating these delights in which our students did a fine job not only creating but devouring.

Australia’s Baking industry is looking at different ways to recruit new students and future talent to address the current skill shortage in the industry. The showcase itself provided our students with food for thought and has posed the industry as a viable career option and a pathway into management, food science or artisan-style baking.

Catholic Education senior school students across the state were recognised through the presentation of the annual Mary MacKillop Awards of Excellence at a special Mass held at St Francis Xavier’s Cathedral in Adelaide, on Saturday 26 October 2019.

We are delighted that Jackson Billingsley and Deakin Summers-Hime were each awarded as the 2019 recipients for St Patrick’s Technical College for their commitment to actively living out the vision of the College.

Above, Jackson and Deakin are pictured with Fr. Philip Marshall, Administrator Delegate of the Catholic Archdiocese of Adelaide, and below, with Principal Danny Deptula. 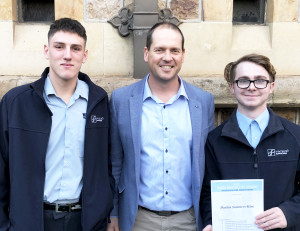