In what has been a record-breaking year for the college, St Patrick’s Technical College has reached another remarkable milestone in 2020 with 100 student apprenticeship sign-ups.

2020 commenced with the celebration of 1000 apprenticeship commencements since the college opened its doors in 2007.

The college’s triumphs have skyrocketed by the year’s end, having crushed the existing sign-up record with apprenticeships signed and secured across various trade industries.

In a year like no other, the college has attained outstanding results in delivering a talent pool of young people with the skills and work-readiness to commence their trade careers.

“In a year like no other, the college has achieved outstanding results in producing our ‘Industry Leaders of Tomorrow’, and to cap off the year, the college’s gifted and talented students also achieved, for the second consecutive year, 100% SACE completion.”

Congratulations to all our students on their outstanding efforts and to our Class of 2020 who have demonstrated a dedication to learning and a commitment to achieving success.

As well as presenting students with graduating certificates, individual awards were presented as part of the College’s annual Awards Program.

Thank you to our 2020 Awards Sponsors: 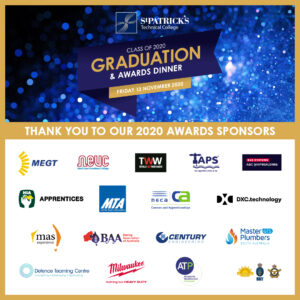 James McDonald was the recipient of this year’s award for leadership and teamwork and was presented by the College’s Chairperson of the Board, Pat Bosco.

THE COLLEGE SPIRIT AWARD recognises a student of the College who has been generous in serving the needs of others and who has always acted as a role model for other students. Raymond Berwick was the recipient of this award and was presented by Rose Caon from MEGT Australia.

Raymond is a kind spirit who has displayed a remarkable level of resilience. Raymond faced the additional challenge of living independently as a Year 12 student, yet he managed to complete his Certificate II in Kitchen Operations and his SACE studies. He can rise to any challenge and remain positive in the face of adversity. He possesses an energy and aura that is inviting, welcoming and honest. Raymond is a good friend to others and has the potential to really excel if he pursues his goals with ferocity and determination.

The 2020 Principal’s Award for the Student of the Year was Michael Kayal and was presented by Wendy Burford from Totally Work Wear Salisbury.