St Patrick’s Technical College is this week celebrating the announcement that Old Scholar Jarrod Morton has been named South Australia’s Apprentice of the Year at the 2018 SA Training Awards.

Jarrod attended the College in 2013 and 2014 to study Applied Engineering (Electrotechnology). In June 2014, Jarrod secured a school-based apprenticeship through PEER with BW Thompson Electrical and recently completed his apprenticeship.

Jarrod received his award at a gala event at the Adelaide Entertainment Centre on 7 September.

“The recognition of five finalists from StPatsTech is a clear indication that our unique approach to senior secondary education is hitting the right notes,’’ Mr Deptula said.

“Since 2007 we have seen nearly 900 young people commence an apprenticeship or traineeship while at the College. We are immensely proud of the College for its outstanding facilities, strong industry connections, knowledgeable teaching staff and consistent career outcomes for students. But even more, we are proud of the hundreds of young people, including Jarrod, who have taken control of their lives and careers by choosing to come to StPatsTech for Year 11 and 12.

“On behalf of the entire College community, I would like to congratulate Jarrod on being named Apprentice of the Year and wish him all the best for the National Training Awards in Sydney in November.’’

Jarrod’s mother Catherine said he had opted to join StPatsTech for Year 11 and 12 to get a more hands-on education. 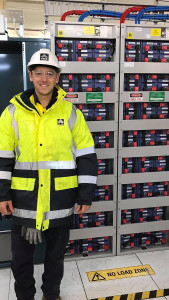 “Jarrod has always been very good at Maths and was considering going to university to do electrical engineering but he thought he would be better off doing the trade to understand how to be an electrician before doing the engineering degree,’’ Mrs Morton said.

“He came to that decision on his own as a teenager, which I think shows a lot of foresight.’’

“We are obviously really proud of Jarrod, his work ethic and his positive attitude. He has worked really hard so deserves this recognition,’’ Mrs Morton said.

She said StPatsTech as a great choice for Jarrod, and his brother Connor who also attended the school and is an apprentice carpenter, because of the opportunities it opened to them both.