The celebration of our Year 12 students was revered on Friday 12 November among family, friends, industry partners, and sponsors at the Class of 2021 Graduation & Awards Dinner, held at Sfera’s Park Suites & Convention Centre.

It was a night of glitz and glamour with the annual event recognising and celebrating our graduating students, their achievements, and successes.

Students were presented their graduating certificates, and Major Awards presented by our sponsors, for outstanding achievements of individual students and apprentices, as part of the College’s Awards Program.

The St Patrick’s Technical College Awards Program is valued over $10,000 and we thank our Award Sponsors for their generosity and support of this wonderful event and of our students.

Thank you to our 2021 Awards Sponsors: 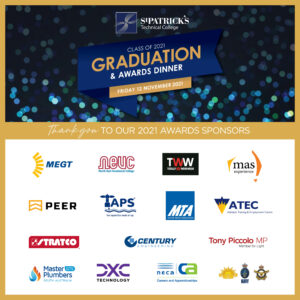 Caitlyn Watson was the recipient of this year’s award for leadership and teamwork and was presented by the College’s Chairperson of the Board, Pat Bosco.

THE COLLEGE SPIRIT AWARD recognises a student of the College who has been generous in serving the needs of others and who has always acted as a role model for other students. Caitlyn Watson was the recipient of this award and was presented by Wendy Burford from Totally Workwear Salisbury.

The 2020 Principal’s Award for the Student of the Year was Austin Kember and was presented by Belinda Kent from Mas Experience.

Congratulations to Riley Read, the first recipient of the 2021 award, and thank you to Award Sponsor MEGT Australia for your generous support. The award was presented by Rose Caon.

Congratulations to Samuel Ivanoff, the second recipient of the 2021 award, and thank you to Award Sponsor North East Vocational College for your generous support. The award was presented by Adam Wiles.