Jack Felton has not had to go far to secure his dream job thanks to Brazier Mobility in Edinburgh North.

Jack, 17, from Davoren Park is a Metals and Engineering student from St Patrick’s Technical College, which is next door to Brazier Mobility. Jack enrolled in StPatsTech last year on a Smith Family Scholarship, which has paid for his tuition at the College, and changed his life.

Initially interested in the College’s Automotive program, Jack missed out on a place due to demand in 2017. He decided he liked the school’s atmosphere so much, he instead enrolled in the Metals and Engineering program.

“It actually worked out better that way because I love cars and have a real passion so I already had a lot of skills in that area,’’ Jack said.

“But this Engineering course has helped me get my job because I was able to learn new skills in the metals workshop.’’

Jack began his Certificate III in Body Repair Technology today (September 6) and hopes to also do an auto-electrician apprenticeship in a few years’ time.

“Once I get my trades down, I would like to buy property and become a property investor,’’ he said.

Jack said the way StPatsTech is structured made it easy for him to make friends and get the support he needed from teachers.

“It was all great being here at StPatsTech. For me the teachers, Ms Burton, Mr Hill and Ms Holliday did a lot to help me by staying back with me in the workshop or helping me with my Maths and English.’’

“We are so pleased to see Jack on his way with his career, and even better, with one of our neighbouring businesses,’’ Mr Deptula said.

“I have had the privilege of touring the Brazier Mobility facility here in Edinburgh North and I believe Jack will greatly enjoy his time there. The company requires its tradesmen and women to be multifaceted in their skills and abreast of the latest technology in the automotive industry, which means the work is always interesting and engaging.’’

Jack recently showed Mr Deptula one of his Engineering projects – the 44 Drum Seat. Jack repurposed an old maritime 44 gallon drum to create a man cave seat. He used AutoDesk Inventor to draw his plans before hitting the tools to create the seat using rubber and timber. 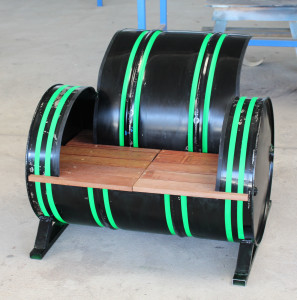 Jack has worked hard this year to complete all his Stage Two SACE requirements and will graduate in November. In the meantime, he will work full time in his apprenticeship.