By Cara Jenkin, The Advertiser, Saturday 17 July 2017 – Pathways to a successful career can come from all directions, as one heavy diesel mechanic has discovered.

“I left Xavier College from year 11 to study year 12 at St Patrick’s because I really wanted to get into a trade and the StPatsTech mechanical program gave me a better chance to do that,’’ Aden said.

Aden said he liked the fact that StPatsTech Automotive teacher Mark Valente is a mechanic by trade as well as a teacher, so was able to impart real-world practical skills to the students. 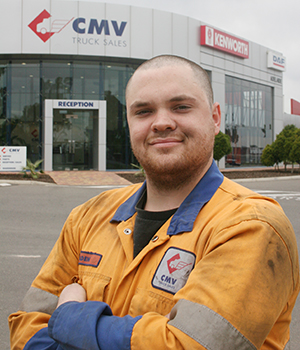 “The thing about StPatsTech is that it doesn’t have just normal teachers who haven’t experienced the things that you want to do.’’

Aden was able to secure a full-time apprenticeship during Year 12 following a successful block of work experience with CMV Trucks.

The company has been a great supporter of StPatsTech having recently taken on another apprentice from the school following Aden gaining his qualification.

Aden said he enjoyed earning his own money during his apprenticeship and had been able to put together a $30,000 to $40,000 tool box as well as more than a dozen cars or motorbikes as hobby projects.

“My trade is also recognised worldwide so there’s no limit for me anymore. I would like to travel and maybe work overseas somewhere like Dubai where the diesel industry is very large.’’