Madison ter Bogt, St Patrick’s Technical College Year 12 student and apprentice Chef at FINO Seppeltsfield, has been named as a finalist in the SA Training Awards 2017, School-based Apprentice of the Year Award.

Madison said she was very excited to be named as a finalist for the annual prize, which is part of the peak awards for apprentices and trainees in South Australia.

St Patrick’s Technical College last year celebrated with Old Scholar, Jack Donaldson, being named as South Australia’s Apprentice of the Year, while Rhys Ferrari, an electronics apprentice with BAE Systems, was a finalist in the School-based category.

“This nomination could change my career,’’ 17-year-old Madison said. 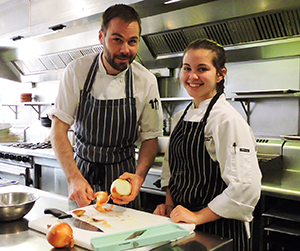 Madison is studying a Certificate III in Commercial Cookery with TAFE SA and under the guidance of head chef, Sam Smith, at the award-winning FINO Seppeltsfield.

“Madison is very committed to the industry in her care and attention she pays to products and technique,’’ Chef Smith said.

FINO Seppeltsfield has three apprentices in its kitchen at the moment, with Madison the only school-based apprentice. Past FINO apprentices, including, Sarah Voigt (StPatsTech 2011), have gone on to work overseas and in top, Michelin-rated restaurants.

Madison has big plans for her future as well. She hopes to travel the world to expand her culinary knowledge.

“Maddie is a fine example of the great outcomes possible for students when educators and industry work together,’’ Mr Kelly said.

“Madison is able to focus on her passion for cooking without sacrificing her education and being shortlisted as finalist will open even more doors to her.

“We are very proud of Madison and wish her all the best for the awards.’’

The winner will be named at the SA Training Awards 2017 Gala Dinner on 1 September at the Adelaide Entertainment Centre.